What did God Give Moses at Sinai

It seems there is a debate as to what Moses got from God at Sinai. Everyone would agree that he got the 10 commandments and the Oral Torah. But beyond that there are a few things which have perplexed me on this.

what did that Oral Torah include?

1) What did the Oral Torah include? We often say that even what a student would say (‘a novel thought’ before his teacher), that too was transmitted at Sinai. Does that refer to whatever interpretation anyone could ever say on anything- ever? Does it mean that God said all this explanation out to Moses, or did He transmit it, by way of transmitting the 13 rules that the Torah can be expounded through, and so since one can derive these thoughts and truths according to those rules, those thoughts were ALSO transmitted at Sinai?

2) Did God give Moses ‘teiku’? and leave things purposely vague until Mashiach comes? Or were teikus a result of confusion that developed afterward.

3) Were the Aggada gemaras about tannaim also given? These people were not born yet?

4) Regards the Written Law: We see that later on with Bnos Tzelafchad that those laws were not yet known to Moses. Does this prove that maybe only the generalities were given at Sinai and not the specifics as the Gemara in Sotah 37b debates? (Meaning that the concept of inheritance was given but the details in such a case and presumably other cases and other mitzvos were not given).

But if we say that we run into a problem with Rashi in Chumash who tells us unequivocally that just as Shemitah was given with the generalities and details, so too was the entire Torah given with its generalities and details explained? Furthermore, Rashi on Shemittah cited above contradicts his own interpretation of Bnos Tzlafchad (Sanhedrin 8a) that indeed Moses was not taught the parsha of inheritance until they came before him?

4) The above points are halachic. What about the historical element? Meaning, the parts of the Torah that happened later after Sinai? These surely could not have been written down at Sinai?

5) Additionally, Rashi (Shemos 24:4) tells us that Moses had already written up everything from Bereshis until Matan Torah before going up on Sinai. So, if anything, we would need to say that God gave Moses the Torah in a text that agreed with the text that Moshe had already written. If we say that God gave Moses a different text, essentially correcting Moses’ original, we are saying Moses either wrote from his own mind, or his prophecy was in error. Neither of those things can be true as they conflict with the 13 articles of faith according to the Rambam.

3) Lastly, I have heard that the parts that happened after Sinai, were given in the form of a jumble of letters that were not divided into words and later on divided into words as they happened. Are you aware of this as an authentic interpretation and if so what is teh source of this?

My apologies that it took so long to get back to you regarding your question. You questions are scholarly, and to be quite frank about it, I am not proficient enough in this tpic to answer you. I did send the question to a talmid chachom that knows more about these topics. This is what he answered me

Anyway, as far as these questions go, this guy’s clearly a real thinker. I want to save this email, and be”H research these questions better in the future. For now, given the time constraints, I’ll have to limit myself to the mareh mekomos that I readily know off hand.

Regarding exactly what Moshe was given at Sinai, there’s a very clear source on this in the Leshem, which in turn provides all the primary sources in Chazal. The source: Sefer HaDei’ah (Drushei Olam HaTohu), Cheilek Bet, Drush 4, Anaf 21, Siman 4, second paragraph until the end of the siman. And then in Siman 5 he talks about how it could be that Moshe Rabbeinu didn’t know what Rabi Akiva was saying if he in fact received the entire Torah from Hashem. YOU CAN ACCESS A COPY OF THIS VOLUME OF THE LESHEM through the following link at Hebrewbooks.org: http://hebrewbooks.org/37426. From there you can either download the PDF or read it online. The above mareh mekomot can be found on pages 170 *(85b) & 171 (86a) of that print.

Regarding the Teiku question, although not addressing it directly, Section Four of the attached document – The Oral Torah and Man (the unpublished sequel of “Why Do I Need to Learn Gemara?”) addresses the general topic; see particularly Chapter 17.

Regarding “Were the Aggada gemaras about tannaim also given? These people were not born yet?,” I would venture to say that these were either גילוים מן השמים later on (בבחינת סוד ה’ ליראיו), or they had a mesorah regarding certain incidents, without names, and later on it was understood that a particular sage was certainly the one being referred to in that incident. But I’m not sure.

Regarding the Bnos Tzlafchad question, “Let My Nation Ascend” (https://www.feldheim.com/let-my-nation-ascend) comments on this on pg. 234, together with sources. See the two attached pictures (the 4th paragraph, that starts with the words “The daughters of Tzlafchad”).

Concerning the remaining questions, they require research. I don’t know off hand.

Hope this is helpful,

Here are the attachment that he sent me. 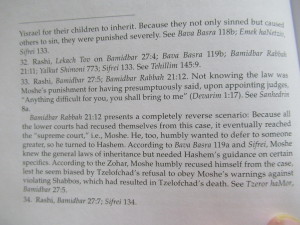 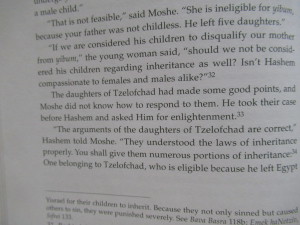 The Oral Torah and Man

Rabbonim of the Beis Hora'a

Behar-Part of a shipment was lost in Transit
Extricate the Intricate
Me’amer – Part II
Fallow Land, Fellow Jews
Emor-Rented a Villa for Shabbos and the Electricity went out
Rochel and Rosh Chodesh
Kedoshim-Leaving a Taxi because the road became Temporarily Impassible
Me’amer – Gathering — on Shabbos and Yom Tov
Mourning Practices During the Sefira
Acharei-Kept Chametz that he was supposed to burn
Kindling Candles
Koshering Utensils for Pesach – Dental Fixatures
Pesach-Does one who lives on the ground floor need to pay for elevator expenses
Afterlife Actions
Kashering Utensils – Part III
PrevPreviousIs Tumah Real of just symbolic?
NextWhat did the Leviim do when not officiating in the Beis HamikdoshNext